When a Software Developer is looking to join a new team, it’s very important that they are able to demonstrate their skills and prove they would be an asset if hired. It’s very common, therefore, that some kind of programming challenge is set to quickly establish someone’s capabilities, as part of the interview process.

In my case, this challenge was to create any piece of software over a period of four days. I’m Alaric, and today I’m going to tell you a little about how I approached this endeavour.


In this lab we primarily work with web applications, as they fit with our targets to satisfy stakeholders the best. However, I come from a background in games development and previously had no experience in this space besides some basic understanding of HTML and design practices. I contacted the Lead Developer handling my challenge and asked if it would be appropriate to build a small game, he was very happy to explain the brief was open-ended, and as long as I could demonstrate capacity, understanding, and talent in programming and best practices then they would be eager for me to make whatever I liked.

With my confidence buoyed, I chose to stick with the technologies with which I’m most familiar: Unity and C#; effective choices for quickly prototyping a game. Another important factor I had to consider is that I am a, truly, terrible graphic artist. As such I needed to build something that could work with a very simple art style, to keep the time short and let me focus on the all-important coding.

My concept was a simple 2D, puzzle-platformer, I called it: The Tech Lab.

You can find the finished project, as well as a standalone executable of the game (if you’d like to play it) here! 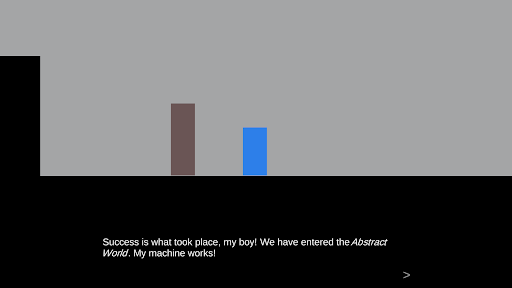 
As well as demonstrating the requisite skills for the job interview, I also wanted to improve my understanding of various aspects of game programming that I hadn’t tackled too deeply in previous projects. I always prefer to push myself to learn and take on new challenges, rather than repeat the same things I’ve done before. Therefore I chose to include various elements that I would develop more deeply than I normally do, such as: dialogue system, event manager, cinematic controller, and a full auto-save/load system.

Working on systems and ideas I hadn’t done previously, along with the rest of the game, does present some important difficulties, however. The technical challenge had a time limit, and it was very important there were no unfinished systems that would detract from the overall polish of the project. To counteract this I made sure to follow SRP, DRY, and KISS principles in order to keep a clear separation between the different systems. This meant that I had the option of dropping some of these ideas from the project if time was running a little short, without compromising any other part of the game. For example, the persistent save/load system had no impact on the game’s physics, and removing it would break nothing.


The basics of the game (movement, collision, camera movement) were very easy and quick to put together, as Unity has an inbuilt physics system that is perfectly sufficient for this project’s needs.

The event manager was the thing that I was most excited to implement at the start, however.

It’s very easy, in games programming, for there to be a lot of overlap in classes with direct referencing going back and forth as elements need to communicate - this can make it difficult to maintain or extend. A solution to this is an event manager, which can be used to allow disparate elements of a game to broadcast and receive messages from each other, without ever directly interacting.

Mine functions by defining two ‘Dictionary’ objects that store events being listened for. Any object can add an event to this list, or can broadcast a trigger that will activate these listeners. Using the ‘singleton’ pattern, the event manager’s static functions can be called by any class without setting up any prior references.


I used this system to allow for scripted events in a level, such as a character reacting to a door being opened; as well as more integral gameplay aspects like resetting when the player character ‘died’.

With the basics of the game down, and systems set up to keep elements nicely compartmentalised; let’s look at a more unique gameplay element I added: the ‘Entanglement Gun’.

I wanted to create a simple physics mechanic that would be quick to implement, given my time constraints, but also offer enough possibility space in puzzle design such that it would suffice for my small prototype. The gun I came up with allows a player to fire a projectile that would connect an object it hit with their character’s physics, so any force impacted on the player would also affect this object.

One of the things this allowed a player to do is this: 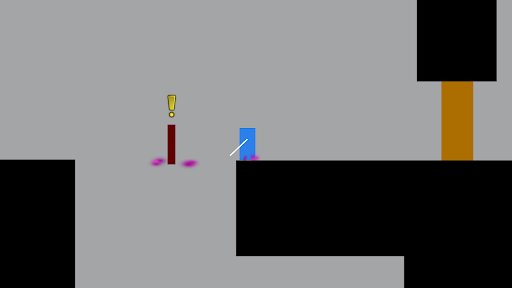 An ‘entangled’ character (red) can be manoeuvred over pits because the player (blue) isn’t falling, and any movement the player makes, such as moving left and jumping, is translated.

The code to create this is actually quite simple (a basic mouse aim/fire function, and a bullet that uses the event manager to activate an entagleable object on-hit), but I had to make sure it remained modular. Thankfully Unity has a particularly useful feature for this: compound objects. Multiple scripts can be attached to a single ‘GameObject’, this allowed me to design the system such that I only needed to add the ‘Entangleable’ script to an object to allow it to be manipulated by the player.


The most important takeaway from this system is that I ensured it was maintainable and extendable. When I presented this project during the technical debrief part of my interview, I was asked to modify this mechanic so the player could entangle multiple objects at the same time. Due to the logical way I structured my code, this was a very simple task of changing only a couple of lines; specifically removing conditional statements that I put in to prevent the player from firing the gun if it’s already entangled, or connecting to more than one object using a single bullet.

Of course I could delve deeper into the myriad of systems and elements that I put together to complete this small prototype, but we would be veering too far into the territory of general game programming - which is a little out of today’s scope.

I successfully completed the project with a little time to spare; although I do suspect I created significantly more than is necessary for the challenge, it is still a valuable addition to my portfolio and a useful learning experience.


The technical debrief was my opportunity to demonstrate my project to the dev team. I was able to play through my short game while discussing the various systems I had implemented; I believe a functioning prototype with no bugs and reasonable visual presentation is an excellent way to present my capacity to fulfil projects.

While we discussed what I had built, and how, I was asked several questions about how easily one might be able to modify and add to the game. The lead developer took a general interest in my game, as well as my code, and ensured any task he asked me to carry out as a demonstration would be reasonably easy and quick. Thanks to their excellent guidance, and my thorough understanding of the code, I had a very positive and enjoyable debrief!

In general I was very pleased at how I managed to properly organise and structure my code , and I believe it was key to my success in the interview process. However if I were to do it again, I would likely choose a smaller, simpler project as the criteria could have been met without committing to such a large undertaking for one weekend.

When preparing for this job interview, I also began learning Ruby and Ruby on Rails as it is the lab’s preferred development tool. As it is an object-oriented language, I mostly just needed to study the syntax using online documentation (the lack of strict-typing was probably my biggest culture-shock), and there were various useful tutorials online to help me get set up and experimenting with what can be put together quite quickly using Rails. Once I had brushed up on the MVC web-development framework, I found RoR to be very powerful for quickly prototyping ideas without having to deal with a lot of the basics it handles automatically. With only a week of learning, I feel I could have chosen to build a simple web app using Ruby for the challenge and created something quite suitable. Although I went with using Unity and C# in the end, having the knowledge of how I might translate my skills and work within this new area was very useful - and the interviewers did find it a big plus that I had already started preparing to work with their most utilised language.

Overall I found the challenge to be quite a satisfying experience; from the start I was given good direction from the team, and communicating my thoughts to them before the start time gave me confidence in building my project - allowing me to stay focused throughout. The dev team encouraged me to ask any questions I had at any point, and were very happy to review and chat about my somewhat unorthodox project during the debrief.

When it comes to completing a technical challenge like this, my advice is to stick to what you know you can do well to demonstrate the requirements - if you’re ever in doubt you can simply ask, as the team is always happy to give advice and clarifications. Even though the lab works primarily in Web Dev, I could show I had the required abilities even by creating something as different as a game.

And I thought it would be fun!